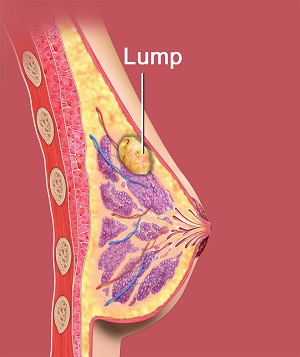 What are Benign Breast Lumps?

The majority of breast lumps are benign tumours that remain localised and do not spread to neighbouring tissues. They can be surgically removed and cause no harm to other organs of the body. An understanding of benign breast disorders is essential to help relieve unnecessary apprehensions.

The cause of the breast lump may vary based on the age of the patient. Fibroadenomas, cysts, and the areas of localised nodularity are the usual causes of a benign breast lump.

Benign breast problems are of several types; but in general, they are classified according to the predominant symptom as lumps, pain, nipple problems, and infection of the breast.

The symmetrical and cyclical nodularity in young women (<30 years) can be managed with proper clinical surveillance of around 2–3 months. Further investigation can be performed if the woman feels that there is a definite new change in the lump of her breasts. But the asymmetric nodularity or thickening in older women (>30 years) requires extensive investigation through mammography and ultrasound. There can be a clinical concern about breast cancer in patients with localised nodularity; in such cases, fine needle biopsy or core biopsy should also be considered. Management of nodularity primarily includes a complete clinical follow up to detect any enlarging mass of nodularity.

Fibroadenomas are harmless lumps of glandular and fibrous tissue. Breasts are made up of lobules (milk-producing glands) and ducts (tubes that carry milk to the nipple) and are surrounded by glandular, fibrous and fatty tissue. Typically, fibroadenoma develops from a lobule and later the glandular tissue and ducts grow over the lobule, forming a solid lump. Fibroadenoma’s in breasts may feel firm and rubbery and will have a smooth texture. This condition is characterised by lumps that move around when pressed, also referred to as ‘a breast mouse’.

About one in six (15%) women have fibroadenoma at some time in their life. Fibroadenomas occupy 12% of all the symptomatic breast masses; most common in women aged 20 to 40 and with peak incidence in 21–25 year age group. In women over the age of 50 years, fibroadenoma occurs in less than 5% of the population. Although the exact cause of fibroadenomas is unknown, the effect of hormonal changes during period and pregnancy are suggestive. Fibroadenomas can be solitary or multiple, palpable or impalpable.

Fibroadenomas can be detectable as a lump- by palpation, or by a mammogram or a breast ultrasound. A majority (80%) of fibroadenomas occurs in single, however, there is a likelihood of having many fibroadenomas scattered throughout the breasts.

Fibroadenomas may have a similar density as the surrounding breast parenchyma and are often not visible in mammography. In mammography, they appear as well-defined dense lobulations and contain calcification. In ultrasound, fibroadenomas may appear as a well-circumscribed, homogeneous, hypoechoic lesion, classically with edge shadowing; gentle lobulations may also be present. In a few cases, coarse calcification can also be seen within the lesion.

It is entirely the women’s choice whether to have the fibroadenoma removed, but most women will not go for removal unless the lump is large. Very few patients request for removal. Patient anxiety is an important factor to consider while deciding about surgery. In spite of the negative triple assessment report, some women are unhappy with the lump being left in their breast. To relieve this understandable anxiety a surgical excision can be performed. The procedure of removing a fibroadenoma is simple and performed under local or general anaesthetic.

Larger fibroadenomas (>3–4 cm diameter), and the lesions with atypical features or those significantly increased in size should be considered for excision biopsy, regardless of patient age and triple testing results. You will be asked to follow up with your physician if the fibroadenoma gets bigger or shows a noticeable change.

Cysts are fluid entrapments in the breast tissue, which are common in women in the age group of 35–50. They usually cease with menopause but are common in women taking Hormone Replacement Therapy (HRT). Approximately 7% of women may have a palpable cyst at some point of their lives. Researchers stated about half of the women who attend breast clinic complain about cysts. Breast cysts are impalpable, asymptomatic and are usually identified by an incidental finding on routine imaging. Cysts appear as lumps that are smooth, soft to firm, mobile, and sometimes tender and often of sudden onset. Cysts under tension can be firm to hard and tender on examination.

Cysts appear as well defined round densities on mammography. On ultrasound, cysts appear as well defined round or oval anechoic (black) lesions. It is difficult to differentiate the cysts with ‘atypical’ features such as internal echoes or thick walls and the solid lesion on ultrasound. Atypical cysts though asymptomatic may require aspiration under the guidance of ultrasound and a sample will be sent for cytological assessment.

The cystic fluid can be drained using a fine needle. Cyst fluid can vary in colour and consistency. The fluid can be clear or coloured- yellow, green, orange, or black. Cyst fluid usually appears as a watery, ‘straw-coloured’ fluid.

Cysts are harmless but consult your physician to check for cancer if you feel a new lump. A cyst that is asymptomatic and has typical features of a benign cyst does not require treatment. Patients should be assured that a benign cyst does not significantly increase their risk of breast cancer. Follow up is not required unless the cyst is symptomatic.

Women with symptomatic cysts (causing significant discomfort) can be considered for aspiration to provide symptomatic relief, either under clinical or ultrasound guidance. A palpable lump that has the typical features of a simple cyst on ultrasound does not require aspiration to confirm the diagnosis.

Surgery is rarely recommended for treating cysts unless an uncomfortable cyst keeps recurring even after repeated aspiration and lesions do not resolve or aspiration depicts atypical or suspicious cytology.

Breast cysts are not cancerous, and cysts do not increase breast cancer risk. In peculiar cases, cysts look unusual and characterise differently on aspiration- this rare condition is called an “intracystic” cancer.

Women who get many cysts may ignore breast lumps and do not go for check-ups by their physician, which results in delayed diagnosis in case it is a sign of breast cancer. Therefore, it is essential to get every new breast lump examined immediately.

Fat necrosis occurs due to trauma (sudden injury) or a specific injury to the breast. Breasts are made up of lobules, ducts, glandular, fibrous, and fatty tissue. The damaged area of breast tissue can lead to a lump formation known as fat necrosis. Necrosis refers to cell death. The damage to the fatty breast tissue commonly occurs following breast surgery, including breast reduction and breast reconstruction, or radiotherapy to the breast. Most women diagnosed with fat necrosis have no history of any specific injury at all.

Fat necrosis appears like a firm painless lump, but some women may have tenderness or even pain. The skin around the lump may look red, bruised, or occasionally dimpled. At times fat necrosis can cause the nipple to retract inwards. Although fat necrosis is benign, it often looks like breast cancer. These lumps of breast tissue may appear as malignant breast tumours on mammograms and other imaging studies. The mass may look dense; have an irregular shape, a spiky border, and a collection of microcalcifications. Therefore, for a proper diagnosis full triple assessment is required.

Fat necrosis often resolves on its own. If the lump does not disappear over time or increases in size, a small surgery may be recommended to remove the lump. Fat necrosis can be observed in women of any age. It is a benign breast condition and does not increase breast cancer risk.