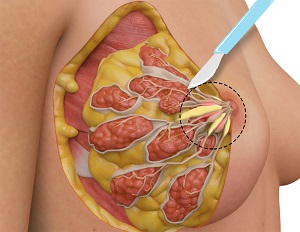 What is Central Duct Excision?

Mammary duct ectasia and periductal mastitis are benign (non-cancerous) conditions of the breast causing sepsis (infection) of the periareolar tissue of the breast (the dark tissue around your nipple).

This condition occurs due to the accumulation of fluid in the milk duct, resulting in widening and thickening of the duct. It is characterised by green, bloody, black or dirty-white nipple discharge, with the nipple turned inward. You will need surgery if antibiotics do not work to treat this condition.

In this condition, the milk ducts are infected and inflamed. It is characterised by nipple discharge, which may or may not be bloody. A lump is eventually formed, which can be felt by touching.

Before surgery, your surgeon may prescribe certain medicines and instruct you to not eat or drink after midnight the night before the surgery. Your doctor may order certain blood tests to be collected before surgery. Your blood pressure and heart ECG are noted.

The surgery involves the following steps:

Most women prefer breast reconstruction following duct excision surgery. This may be performed by a flap surgery which involves surgically removing a section of tissue from another part of your body, typically a muscle flap from your back, to reconstruct your breast.

Sometimes, your surgeon may prefer a two-stage surgery, which may involve placing an expander to stretch the tissue, followed by delayed reconstruction surgery.

Safety Measures to be Followed after Central Duct Excision Surgery

Advantages: Central duct excision relieves the patient from mammary duct ectasia or periductal mastitis followed by reconstruction to retain the shape and form of the breast.

Disadvantages: There are very few disadvantages reported by some patients undergoing this surgery such as excess tissue in the axilla. Infection occurs if immediate nipple reconstruction is performed followed by nipple areolar complex tattooing.