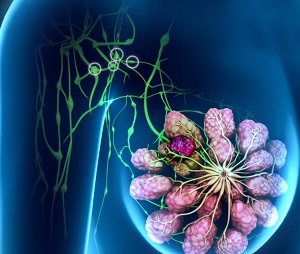 What is a Sentinel Lymph Node?

SLNB is a minimally invasive technique and is proven to be a reliable and accurate alternative treatment modality for breast cancer patients. During a sentinel lymph node biopsy, the surgeon removes only a few (1-5) sentinel lymph nodes.

The lymphatic system is a structure of lymph vessels and lymph glands throughout the body which play an important role in the body's mechanism of fighting infections and tumours. Tiny channels carry fluid and debris to the lymph nodes/glands which act as filters. Groups of lymph nodes are located in the neck, underarms, chest, abdomen, and groin. The lymph nodes that filter waste fluid and cells from the breast are mainly located in the armpit (also called the axilla.) These lymph nodes are usually the first ones affected if cancer spreads beyond the breast. The number of lymph nodes in the axilla varies from person to person but usually ranges from around 20 to 40.

The status of the axillary lymph nodes is one of the most important predictive factors in women with early-stage breast cancer. The axilla must be explored surgically and some lymph nodes removed and sent for pathological examination. The pathological examination of lymph nodes is the most accurate method for assessing the spread of disease to these nodes. The treatment plan for breast cancer is based on whether the lymph glands contain tumour cells.

How is the Sentinel Lymph Node Identified?

The following guides the surgeon to identify the sentinel lymph nodes:

It is a sophisticated lymphatic mapping that will be performed the day before or the day of surgery. A small amount of radioactive substance is injected into the breast that flows to the sentinel nodes through the lymphatic ducts and can be seen on a nuclear medicine scan (lymphoscintigram). Lymphoscintigraphy is used to find the sentinel lymph nodes which are then removed and checked for tumour cells.

Under general anaesthesia, a blue dye is injected into the breast. The dye flows through the lymphatic ducts to the lymph nodes. The first lymph nodes to receive the dye are removed and viewed under the microscope to detect cancer cells. It may not be necessary to remove more lymph nodes if the cancer cells are not found.

An intra-operative gamma probe (a highly directional Geiger counter) used in the operating room directs the surgeon to the radioactive isotope injected several hours before the surgery. The radioactive sentinel nodes are removed by the surgeon and investigated for cancer cells.

Not necessarily all the lymph nodes that are mapped contain cancer cells. Rather, they are the first lymph nodes likely to be affected if cancer cells have escaped into the lymphatic system.

Sentinel node biopsy will not affect whether your tumour is suitable for lumpectomy (wide local excision) or mastectomy.

When is Sentinel Node Biopsy Performed?

Sentinel node biopsy is usually performed along with breast surgeries.  Based on the status of the sentinel nodes, one can decide about the post-surgery radiation which in turn influences reconstruction decision.